A visit to the (slightly) wilder side of town

We gathered at the green waiting for our last player to turn up
allowing us to get over to the Hall green in plenty of time when at about two
o'clock a waitress pops her head round the door. "Food for the
Greenhill family" she announced. I said i would pass it on, i hadn't got the heart to
tell the young girl the only Greenhill that was here was Chris and it
would only take him five Min's to demolish the lot. 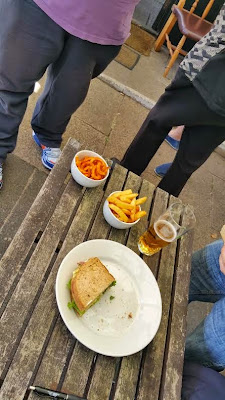 With Chris fully fed and watered we took the ten minute trip to Hall
Green and after last weeks horror stories we were pleasantly surprised
to see the condition of the green.

The order was changed slightly today and i decided i would go number 1
and see if Hall green kept Martin as there number 1. To my eternal
delight they hadn't as the way I played I probably wouldn't have got
many. As it turns out after a bright start i was pegged back and i
eventually stumbled across the line 21-17.

Dave Isgood was nip and tuck throughout but held his nerve and turned
in a winning card to 17.

Larry was flying out of the blocks and at 19-6 up a single figure card
was looking odds on. Hall Green, however, is one of those greens and
there is always a run for the home bowler around the corner. Larry
managed to squash the comeback at the 14 mark though just as it was
gaining some serious momentum.

An invader from the north hasn't had as big an impact as Ian Jackson since
the Great Heathen Army led by the Brothers Ivar the Boneless, Halfdan
and Ubba arrived in east Anglia. That or when everyone in England
simple mindedly watched last of the summer wine every Sunday. Ian's
start even eclipsed the lamb and with him at 18-4 it looked like we
may be onto a blockbuster start. Again though the willy homester found
an out mark and started putting a run together. Fortunately for us the
northern scourge managed to pillage a victory to 10.

So the first four winners and a lead of 26 was a more than
satisfactory start even if at one stage it looked as though it could
be a fair few more.

We put wiggy on 5 just for this eventuality hoping he could follow up
the good work and extend our lead. Unfortunately it wasn't to be as Wiggy
wasn't on top form and his opponent bowled very well. As wiggly is
acutely aware and will be reminded of constantly, however, a bad decision and a
case of hubris equal a defeat to 13. In the ever annoying ones
defense he has been putting up with the undefeated pressure nonsense
for two long and now perhaps he can relax a tad and get back to the
bowling. Last week i also promised to tell you about the time i tried
to sell him to the travelling circus and i never break a promise.

I was minding my own business walking along the a45 just past the
park by where studio caves used to be and i found myself approached by
a stout man in a red suit and a top hat. I thought he wanted a game
of bowls because he kept shouting roll up roll up. "Cranky sod" i
thought, so I directed him to the Greville as he would fit in up
there. Before i wandered off he managed to explain to me that he
owned a circus and was looking to fill some vacancies he had. The
light bulb went of and realised this could be my chance to get rid of
Wiggly. I said we had a right clown of our own and suggested him for a few roles. The
first was as a trapeze artist but once i found out they use safety
nets i realised i wasn't going to be able to get him hurt so we moved
to plan B. Since the circus had a crash on the M40 with an Immac lorry, they were without a bearded lady.
Perfect i thought, Wiggy is a little womanly and surely At his age he can grow
some facial fuzz. 6 weeks later not a sprout and he was balder than Cj's
head. We rubbed his face with Shane Warne's miracle grow mixed with
manure and put a heat lamp on his chin, all it did was give his chin a
nice tan and made him smell a little better. My dreams crushed and the
circus owner now bankrupt we went our separate ways and wiggy is still
a taverner. Don't worry guys i am still trying and don't miss next
week when i recount the time i tied to donate him to medical science.

JP was next up and managed to go all game without smiling, although
sharing the green with wiggy does that to me too. JP was never really
in top gear but crucial shots at the end of the game meant he gave
very little away losing 17.

Meanwhile Richie was locked in a close battle swapping the lead as
often as i would swap shirts if i was playing in the ladies FA cup
final. Richie made the decisive run at the death to pip his game
21-18.

Steve's game was more like the first four as he bowled very well in
order to lead 16-8 eight ends later though he would find himself
deadlocked at 17. Steve redoubled his efforts though and finished with
two quickfire doubles to win 17.

I knew when we did the draw Hall green had left their best two till
last. 21 though is a good lead especially with the experience i had at
11 and 12. the question was always what will the unpredictable duo of
Jack and Killer manage.

Jack started brightly only to suffer a little wobble mid way through
the game. There were mild histrionics but no sarcastic self applause
when missing the land twice. To his credit though jack regained his
composure tried something different for him and won a very tight game
to 18. This was a big step for jack who is primarily known as a home
bowler and this is a game that he definitely would have lost this time
last year.

The Killer went on a run that suggested he would put the game beyond
Hall green on his own but, like so many before, found his lead eroded
and at 18 across the momentum was against him. Chris though like Jack
has matured fantastically over the past 12 months managed some big
shots at squeaky bum time to claim victory to 18.

Chris James was up against Dave flowers and Scotty was up against
Martin Fowles. the two homesters were both in fine form using the
green beautifully to their advantage with some fiendish marks being
played. Scott and Chris both worked hard cutting down the twos and
staying in the games as long as possible and our 11 and
12 finished with 13 and 12 respectively to bring home the victory by
ten. I Know both will be thinking a few bad ends cost them both from
getting withing striking distance of a win but Dave and Martin are 2
very good players. On a tricky green they went on with a target they
had to reach and they did everything we needed and asked off them.

The final four managed to hold the deficit to 11 and leave us with a
win by ten. While a few of us can bemoan our performances it was a
brilliant away performance. with no single figures and 8 winners i
have to be delighted. 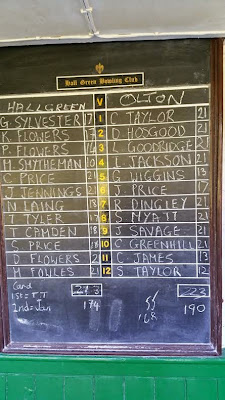 The tea at the Hall green was an odd one packed full of quality but
not one that you would say was in abundance. This left a hole in poor
Killers tummy as two plates just isn't enough for the calorie machine
so when we got back to the Otlon he hovered up the left overs and
bought a couple of packs of crisps.


The Alliance side picked up a very healthy home win by 57 over the
Bradford with single figure cards for Dave Follows and Alan Savage
both breathing down the necks of the current A side.

I doubt he will read this but this week we welcomed a new gaffer to
the pub and it was a good start as his staff didn't burn the pizza.
Apparently we will become an Ember Inn which if the Hall Green is
anything to go by is great news for the Camra members amongst us.
Posted by Scotty at 4/21/2015 01:41:00 pm