This year Captain Craggers is playing for Woodfield BC in the Summit Garage League. He wrote a report last week but it wasn't very good and there were no pictures. As editor, I have decided to skip it and start with his trip to The Windmill in Cannock last night.

I set my sat nav for the Windmill and as per usual went a completely different way to the previous efforts and spent the 95% of the journey having absolutely no clue if the sat nav was directing me to the correct place or not. By now I was on top of a dirty great hill and could hear the low moans of a distant Stan Collymore either still very excited by Villas cup semi success or he was back up to no good in the back of a nova. With these clues I knew I was close. “Turn right and you have reached your destination” the sat nav told me in her sultry seductive voice. I duly obliged and she soon turned from seductive to viscious “ that’s a garden you fool I said right”. I don’t like this new technology its always shouting at me. You should have heard what the toaster called me after burning the toast it was truly shocking, I didn’t know what one of those was let alone that it could be inserted there and twisted.

It was a beautiful gorgeous warm evening at sea level but up at windmill height there was still a snow bank to be cleared and everyone was dressed up ready for an ice age. 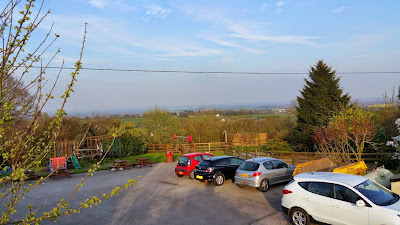 I was beginning to regret leaving my jumper in the car and later on I would regret not leaving my woods in it. Things weren’t going well for the first four with the Windmill guys bowling extremely well. Carl and Chris bowled better than their scores of 7 and 12 suggested but Micky Bardsley and Glynn Storer were on good form. Stuart pulled out some amazing shots to battle to 10 and John Newey Fell just short of the victory that looked likely losing to 20.

The second four was a much closer affair with the green slowing up end by end nobody managed to get away from their opponent. Lyndon Hazlehurst, who now isn’t legally allowed to shave due to two endangered species of bird making nest in his beard, bowled very well to win 20. Nick Wyer also won to 20 with another fine performance. My own game was interesting for the amount of tapes called and subsequent jacks thrown back, although in my defence some were inches short of a mark and as the green got slower those inches turned to feet and metres. One may even have been a furlong short of a mark but it was picking up the dew by then. Lee Cavill punished the last of these badly set blocks with a run of twos that cracked the game open and left me not so much tilting at windmills as aiming at imaginary blocks and finishing with 16. Nick Howells and his glow in the dark woods were last on the green and despite a heroic effort finished on the wrong side of an 18 shot loss. 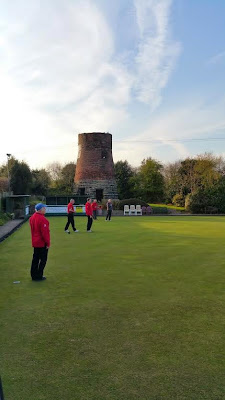 So 2 winners and a few that could have gone either way but it was a spirited effort after last weeks home defeat. I eventually got home with a record low six wrong turnings which pleased me no end as last time I drove away from the windmill on my own it took me 3 hours to get back to civilisation. 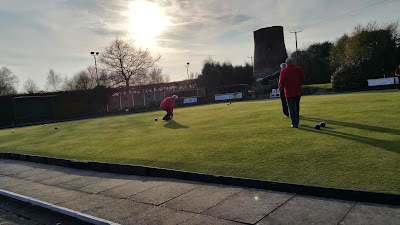